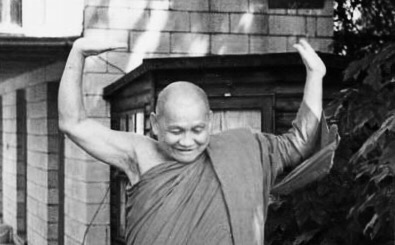 Once there was a layman who came to Ajahn Chah and asked him who Ajahn Chah was. Ajahn Chah, seeing that the spiritual development of the individual was not very advanced, pointed to himself and said, “This, this is Ajahn Chah.”

On another occasion, someone else asked Ajahn Chah the same question. This time, however, seeing that the questioner’s capac- ity to understand the Dhamma was higher, Ajahn Chah answered by saying, “Ajahn Chah? There is no Ajahn Chah.”

There was an example where a monk approached Ajahn Chah and complains that as he sits and meditates thoughts of lust just take over his mind.

“That’s easy,” replied Ajahn Chah, “when the next Wan Phra comes we’ll have you get up into the sermon seat, and we’ll get you to describe to all the visitors to the monastery all of your sexual fantasies from the past week.”

The monk suddenly found it a lot easier to put the thoughts aside.

Sensuality is like taking a stick and using it to poke a big red ants’ nest. The more we poke it, the more the red ants come falling on us, onto our face, into our eyes, stinging our ears and eyes. But we don’t see the drawbacks of what we’re doing. It’s all good as far as we can see. Understand that if you don’t see the drawbacks of these things you’ll never work your way free of them.

We’re like a tree with roots, a base, and a trunk. Every leaf, every branch, depends on the roots to absorb nutrients from the soil and send them up to nourish the tree.

Our body, plus our words and deeds, our senses of sight, hearing, smell, taste, and feeling, are like the branches, leaves, and trunk. The mind is like the roots absorbing nutrients and sending them up the trunk to the leaves and branches so that they flower and bear fruit.

When we sit in a quiet forest when there’s no wind, the leaves are still. When the wind blows, the leaves flutter.

The streams, lakes, and rivers that flow down to the ocean, when they reach the ocean, all have the same blue color, the same salty taste.

The same with human beings: It doesn’t matter where they’re from — when they reach the stream of the Dharma, it’s all the same Dharma.

We live like a chicken who doesn’t know what’s going on. In the morning it takes its baby chicks out to scratch for food. In the evening, it goes back to sleep in the coop. The next morning it goes out to look for food again. Its owner scatters rice for it to eat every day, but it doesn’t know why its owner is feeding it. The chicken and its owner are thinking in very different ways.

The owner is thinking, “How much does the chicken weigh?” The chicken, though, is engrossed in the food. When the owner picks it up to heft its weight, it thinks the owner is showing affection.

We too don’t know what’s going on: where we come from, how many more years we’ll live, where we’ll go, who will take us there. We don’t know this at all.

The King of Death is like the owner of the chicken. We don’t know when he’ll catch up with us, for we’re engrossed — engrossed in sights, sounds, smells, tastes, tactile sensations, and ideas. We have no sense that we’re growing older. We have no sense of enough.

We human beings don’t want suffering. We want nothing but pleasure. But actually, pleasure is nothing but subtle suffering. Pain is blatant suffering. To put it in simple terms, suffering and pleasure are like a snake. Its head is suffering; its tail is pleasure. Its head contains poison. Its mouth contains poison. If you get near its head, it’ll bite you. If you catch hold of its tail it seems safe, but if you hold onto its tail without letting go, it can turn around and bite you just the same. That’s because both the head of the snake and the tail of the snake are on the same snake.

Both happiness and sadness come from the same parents: craving and delusion. That’s why there are times when you’re happy but still restless and ill at ease — even when you’ve gotten things you like, such as material gain, status, and praise. When you get these things you’re happy, but your mind isn’t really at peace because there’s still the sneaking suspicion that you’ll lose them. You’re afraid they’ll disappear. This fear is the cause that keeps you from being at peace. Sometimes you actually do lose these things and then you really suffer. This means that even though these things are pleasant, suffering lies fermenting in the pleasure. We’re simply not aware of it. Just as when we catch hold of a snake: Even though we catch hold of its tail, if we keep holding on without letting go, it can turn around and bite us.

So the head of the snake and the tail of the snake, evil and goodness: These form a circle that keeps turning around. That’s why pleasure and pain, good and bad are not the path.

The Buddha’s teachings are direct, straightforward, and simple, but hard for someone who’s starting to practice them because his knowledge can’t reach them. It’s like a hole: People by the hundreds and thousands complain that the hole is deep because they can’t reach to its bottom. There’s hardly anybody who will say that the problem is that his arm is short.

The Buddha taught us to abandon evil of every kind. We skip over this part and go straight to making merit without abandoning evil. It’s the same as saying the hole is deep. Those who say their arms are short are rare.

Your external home isn’t your real home. It’s your supposed home, your home in the world.

As for your real home, that’s peace. The Buddha has us build our own home by letting go until we reach peace.